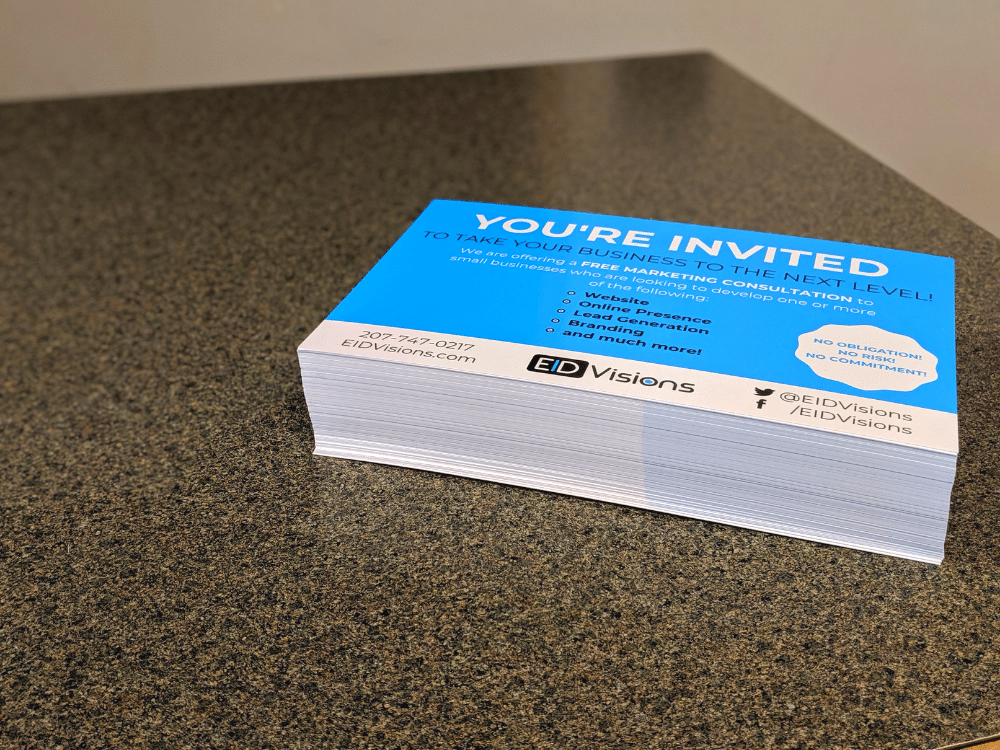 I just finished getting approximately 500 postcards ready to be mailed. I added a stamp to each one, applied a mailing address label, and finally, I signed them by hand. Each postcard will be sent out to a local fellow business owner letting them know about an opportunity for a free marketing consultation. It was a process that took me several hours of repeatedly doing the same thing over and over.

I didn’t have to do that.

Instead, I took the time to make sure every postcard was unique and personal. Even the smallest details, like how the stamp and label are placed, makes it feel human and real. That’s why I did it. What every business owner will receive is not just an advertisement, they will receive a legitimate invitation to connect with us to see what work can be done for mutual growth.

Where others might see a standard postcard at first, I see a reflection of my brand’s authenticity. And why shouldn’t I? That’s what I want, for people to see the real EID Visions.. We are real, genuine people who can relate to other small businesses because we are one too. Any obstacles a small business could be going through, it’s likely we’ve had to jump the same hurdle.

We are real. Why should we portray ourselves as anything else?

Imagine if every time someone signed up for Amazon Prime, Jeff Bezos wrote a handwritten letter thanking them for doing so and letting them know about all of the benefits that Prime gives them. I would imagine that very personal gesture would be looked at favorably.

However, now that Amazon has crossed 100 Million Prime subscribers, that is no where near feasible.

As nice and genuine as handwritten letters and postcards are, those are things that don’t scale up with your business. That is to say, as my small business grows and my marketing efforts need to be increased, I won’t be able to rely on hand writing letters.

While some might bemoan being a small business, your small size is actually a strength and makes you more agile. Larger businesses and organizations are too big to personally connect with someone, a local small business can more easily touch base with someone in their area. This also works for getting feedback so you can pivot quicker.

Large companies often send out surveys that solicit feedback on what they are doing. When was the last time you were in a rush to fill that out? After all, it’s usually just a massive corporation. However, people are more likely to talk about their concerns with a smaller business because they can relate more and feel that personal touch.

One passage that particularly struck me is below:

“Another reason founders don’t focus enough on individual customers is that they worry it won’t scale. But when founders of larval startups worry about this, I point out that in their current state they have nothing to lose. Maybe if they go out of their way to make existing users super happy, they’ll one day have too many to do so much for. That would be a great problem to have. See if you can make it happen. And incidentally, when it does, you’ll find that delighting customers scales better than you expected. Partly because you can usually find ways to make anything scale more than you would have predicted, and partly because delighting customers will by then have permeated your culture.

But perhaps the biggest thing preventing founders from realizing how attentive they could be to their users is that they’ve never experienced such attention themselves. Their standards for customer service have been set by the companies they’ve been customers of, which are mostly big ones. Tim Cook doesn’t send you a hand-written note after you buy a laptop. He can’t. But you can. That’s one advantage of being small: you can provide a level of service no big company can.”

As a perfectionist, it was very easy for me to worry about how small we are, relatively speaking. However, recently, I’ve learned to lean into the fact that we are small and channel it into being better and doing what larger marketing agencies are not able to do.

At EID Visions, we welcome every new client with a welcome package that has some local Maine treats, company swag, and a handwritten note welcoming them into the EID Visions family. Right now, this is feasible because our client load is manageable. As we grow and approach faster levels of growth, I will most likely not be able to hand write a note to everyone. However, by that point, as Graham says, “delighting customers will by then have permeated your culture.”

What Can You Do That Doesn’t Scale?

My goal with this was not to necessarily repeat what Paul Graham had to say but to spark ideas on how you can help your business grow without the initial worry of whether it can scale or not.

As EID Visions grows, I won’t necessarily have the time to write handwritten notes to everyone. However, EID Visions will still be a small business with a culture that values client satisfaction and engagement. The bricks of that foundation are laid in the 500 postcards that were individually stamped, addressed, and labeled.

In the future, we might just have one specific person to manage Client Relations whose job will be to share the story of our history of how we were founded and welcome people into the EID Visions family. So while it’s not hand writing personal notes, it still serves the same purpose of heightening the customer experience, but now scaled to a bigger business.

What you do today won’t necessarily be what you will be doing in a year or three or ten but, it can help give your small business a solid foundation for future endeavors.

What are some things your small business is doing to give that personal touch to current and prospective customers? How are you doing better than a bigger competitor? We’d love to hear what you have to say.

Looking to give that personal touch but don't know where to start? We can help!

Getting Started With Email Marketing as a Small Business

If you’re thinking about doing email marketing for your small business, it can seem like a daunting task. We have laid out easy to follow steps for getting started with email marketing; so you can spend less time worrying and more time doing.